Menu
} });
Home » ENGLISH NEWS » I LOOK FORWARD TO WORKING WITH YOU IN THE NEW TERM, UK’S BORIS JOHNSON TELLS MUSEVENI

I LOOK FORWARD TO WORKING WITH YOU IN THE NEW TERM, UK’S BORIS JOHNSON TELLS MUSEVENI 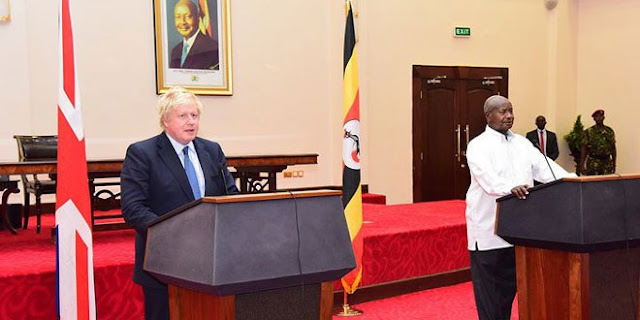 The Prime Minister of the United Kingdom Alexander Boris de Pfeffel Johnson has said he looks forward to continuing to work with President Museveni during his new term in office, adding that he hopes they can see each other in person again soon.

“Thank you for inviting me to your inauguration. Unfortunately, I cannot attend, but I look forward to continuing to work with you during your new term in office and I hope we can see each other in person again soon,” he said in a letter from London.

PM Boris Johnson said the United Kingdom and the Republic of Uganda share a deep and historic relationship.

“I hope that this year we will continue to work together towards our shared objectives of delivering quality education for all children at the Global Education Summit in London in July, and a strong set of climate commitments at COP26 in Glasgow in November,” he said.

President Museveni will be sworn in tomorrow May 12 at Kololo Ceremonial Grounds after winning the January general elections with 5,851,037 votes, representing 58.64% of the 9,978,093valid votes. 12 Heads of State have confirmed attendance while several countries will be represented at the Vice president, Prime Minister, and Ministers of Foreign Affairs level.